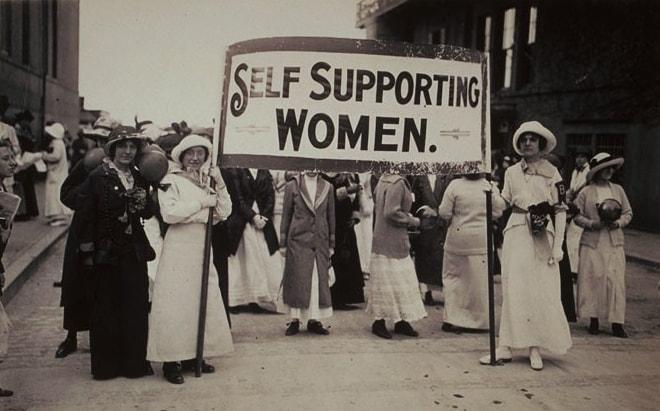 Yesterday we learned about suffragist and working women’s advocate Leonora O’Reilly, who serves as a great case study in understanding the experiences of working-class women in the suffragist movement, many of whom were Irish. The Suffrage movement existed alongside a multitude of movements during a time of immense social change in the United States, including labor movements and civil rights movements. Since many of the working class women of the time were Irish, we will take the next couple of days we will look at the involvement of working women in the Suffrage Movement. Today we will start with the challenges that working class women faced while trying to be included in the Suffrage Movement. Tomorrow we will take a look at how these women paved their own way in the Movement.

The Women’s Suffrage movement often refers to the time between the Seneca Falls Convention in 1848 and the passing of the 19th amendment in 1920. It is important to understand that during this roughly seventy-year period, the movement saw three generations of women fighting for suffrage. During the early days of the movement, working women were largely excluded from participating.  Elizabeth Cady Stanton, well known suffragist and writer of the Declaration of Sentiments that was presented at Seneca Falls, herself had mixed feelings on working women. Despite advocating for an improvement in working conditions, Stanton still felt that the lower classes were afflicted with a “dense fog of poverty, ignorance, and superstition.” (Elizabeth Cady Stanton, “On Labor”). Furthermore, Stanton argued for the benefits of granting upper class women the right to vote first, writing in a publication of the Suffragette that educated women “have a right to call a halt on any further enfranchisement of the ignorant masses, until the better element in society is fully recognized in the government. Our rulers… have it in their power to extend the suffrage to the best class, on an educational qualification” (Elizabeth Cady Stanton, “Educated Suffrage Again,” The Woman’s Journal, No. 51, December 22, 1894.). Early movement leaders like Stanton, and Susan B. Anthony, felt that suffrage should be the primary focus of many working women involved in the movement who were also involved in labor movements as well. At the same time, Labor movements were predominately male dominated and ignorant of the unique experiences that working women faced. Many women involved in working women organizations also felt that the Suffrage Movement was ignorant to their struggles, and that they would be left behind if their needs did not align with their wealthier sisters. This fear was not off base given the fact that many in the suffrage movement, that had largely been born out of the abolitionist movement, had set aside their Black brothers and sisters in the fight for suffrage to gain support in the South during a time of increased white supremacy.

Stanton’s daughter, Harriot Stanton Blatch, vehemently disagreed with her mother’s opinions on working women, arguing in the same publication as previously mentioned that “Because you overlook the fact that the conditions of the poor are so much harder than yours or mine, you are led to argue that ‘the ignorant classes do not need the suffrage more than the enlightened, but just the reverse.’ Every working man needs the suffrage more than I do, but there is another who needs it more than he does, just because conditions are more galling, and that is the working woman.” (Harriot Stanton Blatch, “An Open Letter to Mrs. Stanton,” The Woman’s Journal, No. 51, December 22, 1894). Stanton Blatch represents a new understanding within the suffrage movement on the importance of including working class women as a means of gaining the vote. Harriot Stanton Blatch joined the Women’s Trade Union League, an organization designed to bring women of different classes together to advocate for labor reform. It was here that she crossed paths with labor and suffragist activists like Leonora O’Reilly. In 1907 Stanton Blatch founded the Equality League of Self-Sustaining Women which would later be called the Women’s Political Union. The goal of the League was to connect working class women with their suffragist sisters and assist them in participating in the suffragist movement.

Despite the efforts of Stanton Blatch and other wealthier members of the Equality League of Self-Sustaining Women, their activism often fell short. The wealthier women often talked down to the working women, using demeaning language to describe them in pamphlets and speeches to elicit emotion and sympathy. The experiences and voices of the working-class women were often ignored, or cherry picked, with participation becoming less accessible to working women as time went on. Leonora and other working-class women either left or were pushed out for advocating for themselves. In part 2 we will talk about what these women did to raise their voices and advocate for themselves.