Click link to watch video of each award ceremony 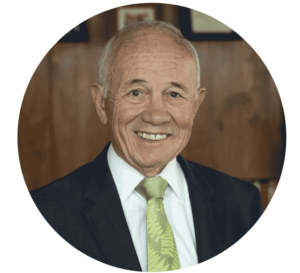 George N. Campbell, Jr. grew up on a farm in Brewer, Maine, learning the lessons of hard work, loyalty and the importance of community. As an 11-year-old he saw the family farm burn to the ground and also witnessed the community uniting to rebuild it. That experience left an indelible mark on George that endures today.

He traces his Irish roots through his great- grandfather who emigrated from Ireland to New Brunswick. His Maine roots began with his grandfather, who came to Brewer and worked as a street sweeper – possibly laying the ground for George’s future work in transportation.

In the public sector, George was appointed Commissioner of the Departments of Transportation in both Maine and New Hampshire, was the Maine State Development Director, and served on the Portland City Council with a term as Mayor. In 2016, George became part of a great turnaround story when he took over leadership of the University of Southern Maine Foundation as President and CEO.

George has helped raise millions of dollars in private philanthropy for organizations that serve the public good, and has also served on the boards of Martin’s Point Health Care, Friends of the Eastern Promenade, and Lunder-Dineen.

An avid runner and glutton for punishment, George has completed seven marathons, including those in the Irish towns of Boston, MA and Dublin IRL. George lives in Augusta with his wife Dawn Stiles. They celebrate the bounty of family with children, stepchildren, grandchildren and one very spoiled dog named Murphy.