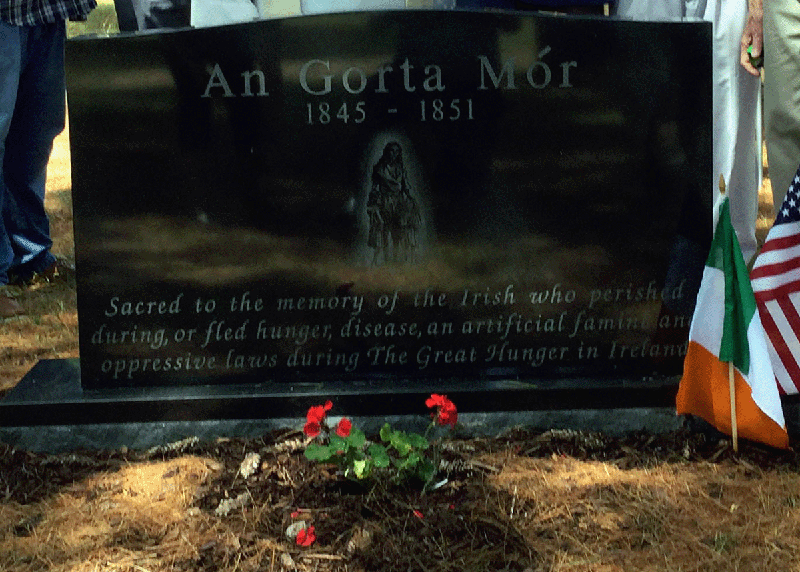 May 24, 2020 marked the annual remembrance day for The Great Hunger of 1847 (An Gorta Mór in Irish). The moving ceremony takes place each year iPortland’s Western Promenade, the final resting place of over one thousand 19th century Irish. Many of them fled their homeland during the potato famine and sought refuge in Maine. Only a portion of these individuals was able to afford gravestones, leaving roughly 1200 Irish to be buried in unmarked graves.

In 1999 the Ancient Order of Hibernians erected a memorial to commemorate those early Irish and to remember their contributions to Maine.

Special recognition to Matt Barker for his research and dedication to this project, to Tom Ryan of the Claddagh Mhor Pipe Band, to James McClay President of the Ancient Order of Hibernians (Portland) @AOH, Division 1 Portland Maine., members and leaders of the Maine Irish Heritage Center and The Irish American Club of Maine.

For more information on the history of the Irish in Portland, check out Matt Barker’s book “The Irish of Portland Maine: A History of Forest City Hibernians“. To learn more about the history of the Irish in Maine, check out “They Change Their Sky: The Irish in Maine by Michael Connolly”. The Portland Hurling ClubPortland Gaelic Football ClubBurns Sisters Irish DanceStillson School of Irish DanceMaine Police Emerald SocietyMaine Gaelic Sports Alliance