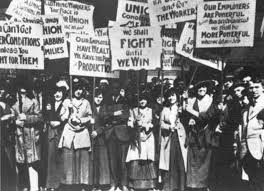 At this point, women like Leonora decided to create groups for themselves, and advocate for suffrage in a way that represented them and put their voice out there. These women felt that cooperative action that focused both on the treatment of workers and women’s suffrage was the best way to cause lasting change. They saw the intersection of the two movements far better than their wealthy suffragist or working male counterparts, having lived the unique experiences of being working class women. Lower wages and unfair labor conditions disproportionately impacted women. By granting them the right to vote while simultaneously drawing their attention to the conditions that their working brothers and sisters faced, hopefully if given the vote women would use it to improve working conditions.  Leonora and her friend, fellow activist Rose Scheinderman, created the Wage Earner’s Suffrage League. The goal of the organization was to provide working suffragist women a space to participate in the movement where they had agency over their stores and their experiences were acknowledged. W A unique aspect of the Wage Earner’s Suffrage League was their membership system. Two forms of membership existed, active membership and associate membership. Active membership was reserved for employed women only and these members held a more involved position. Associate membership was for those who did not fit the criteria for membership but wanted to still support League, those who may now be called “allies” to the League. The goal was to keep the struggles and voices of working-class women front and center.

Members of the Wage Earner’s Suffrage League often spoke out against anti-suffrage talking points while drawing attention to labor conditions. For example, when a senator stated “Get women into the arena of politics with its alliances and distressing contests—the delicacy. is gone, the charm is gone, and you emasculize [sic] women.” (“Senators vs. Working Women: Miss Rose Schneiderman, Cap Maker, Replies to New York Senator on Delicacy and Charm of Women,” Wage Earner’s Suffrage League, 4, Leonora O’Reilly Papers.) Schneiderman retorted by saying “Surely these women won’t lose any more of their beauty and charm by putting a ballot in a ballot box once a year than they are likely to lose standing in foundries or laundries all year round.” (12 “Senators vs. Working Women: Miss Rose Schneiderman,” 5.)

With lower wages and unfair conditions in industrial labor disproportionately impacting women, the grievances of the labor movement in many ways became the grievances of the women’s rights movement. By granting women the vote, the hope was that they would support legislation that improved these conditions that many women, and children, faced. In fact, many businesses and corporations lobbied against women’s suffrage, fearing that if women could vote, they would vote in favor of legislation improving working conditions, raising wages, and doing away with child labor. After the passing of the 19th Amendment, many of these women continued advocating for improved labor conditions.